As part of any LDV and PIV measurements, seeding particles need to be introduced into the flow. For large size wind-tunnels the volume of air is large and “off the shelf” seeding generators cannot produce the density of seeding required. Smoke generators are generally considered to be the only devices that can generate large quantity of seeding and produce sub-micron particles. In LDV applications the small aperture of the receiving optics combined with the small size of the smoke particles produces weak signals and low data rates. In PIV applications the interrogation areas in large wind tunnels are required to be large and smoke particles are not ideal because they produce weak signals (or necessitate the use of high power lasers).

The SCITEK system solves these problems by making use of larger particles (1 to 6 microns) using high-pressure atomising nozzles. An additional advantage is that these nozzles deliver very large quantities of seeding particles (1010 particles per second). Also by using more than one nozzle the seeding can be spread over a large area and can be designed to produce high data rates, reducing experiment time and thus costs. For large wind tunnels the saving from reduced running time recovers the cost of the seeding system in just a few runs.

Read our Quick Specs below.

Customisation:
Each system is custom built to use as many nozzles as necessary.
Scalable to provide any quantity of seeding over large areas.

Operation:
Nozzles are mounted on rakes activated by valves remotely from the experiment.

Other applications:
Can also be used in open-air experiments.

The SCITEK seeder makes use of high-pressure (2000psi) impactor type atomising nozzles. The important characteristic of these nozzles is that they produce very small droplets (much smaller to those produced by swirl type atomisers). A typical distribution of particle counts across the full width of the spray cone of such a nozzle using water is shown in the figure. It can be seen that 72% of the droplets are below 6 microns which means that the majority of the droplets imaged by aPIV system will be below 6 microns. Although larger droplets are present their population, and consequently their influence in the measurements, is statistically very small. In cases where the larger droplets may be a problem SCITEK can provide aerodynamic filters which remove the larger droplets from the flow with almost no pressure loss to the flow.

Both oil and water can be used with the SCITEK LS-HP seeders. For most applications oil is used to provide seeding particles into the flow because they do not evaporate as they travel through the tunnel. Where oil is not desirable for reasons of cost, availability or disposal difficulties, water can provide a suitable alternative. Obviously water is more easily available and can be disposed by evaporation or drainage at the end of the experiment. The disadvantage of using water as seeding material is that some evaporation may take place and reduce the quantity of small droplets, but on installations so far this has never proved to be a problem. One of our systems was installed on a high Mach number (0.8) wind tunnel where good PIV experiments were conducted with high data validation rates. From the images produced the size of the water droplets was estimated (from the scattered intensity) to be around 3 microns. 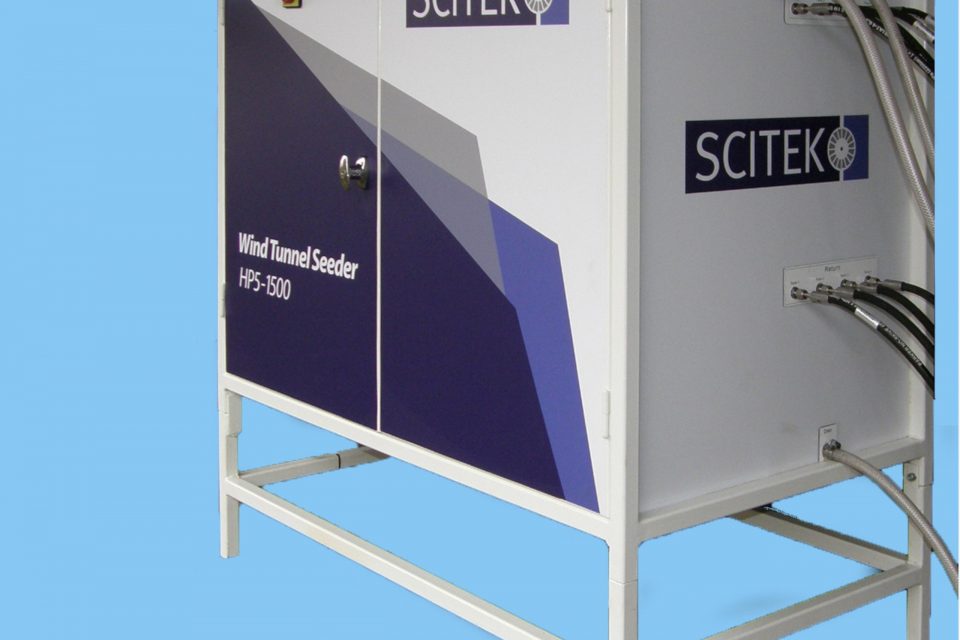